As I like to read gaming publications such as Edge alot, I've kept coming across Enslaved Odyssey to the west but took no notice of it.


Recently a demo was released on the Playstation store in which I decided to give a try and these are my thoughts on it. 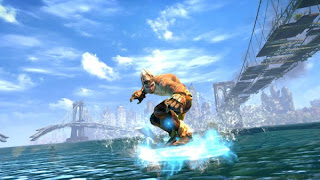 WOW! I mean from the graphics to the mechanics, everything looked top notch! As I was escaping the robots inside the ship to running on top of its wings, desperately trying to make it to the last escape pod.

The games jump and climb mechanics look somewhat similar to the Uncharted series however what really caught my eye was the fight mechanics and the futuristic weapons. It was basically a mix of high end technological weapons used in a mixed martial arts way, this I thought was a really good way to make the battles more engaging.

I'd have to say my favourite part of the demo is when the whole ship turns on its side and you have to be able to climb it up quick enough before its wing hits the building ahead. I think I must have skipped a heartbeat when I realised that I just made it on to a safe area of the wing and out of danger from getting hit by the building.

At the moment the demo looks to have been polished to its best performance but in time we'll see if the full game will be able to do the same.