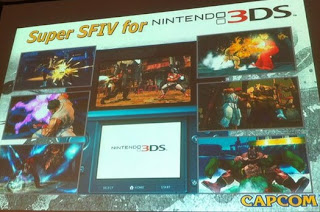 It was recently announced that the Nintendo 3DS port of the huge Super Street Fighter IV will include a special feature that's only possible on the 3DS!
Street Fighter IV porducer Yoshino Ono explained that the 3DS port would include everything that the current Xbox 360 and PS3 versions have plus a little extra. Maybe the extra is the inclusion of the recently announced new costumes plus new characters Yun and Yang?
Ono teased at a special feature or new mode that was created in conjunction with the Nintendo president Satoru Iwata and Shigeru Miyamoto and that this can only be done on the 3DS but was unable to elaborate on it until given the go ahead by Nintendo.
So there you have it! According to Ono the port will be perfect of course adjusting controls to fit the 3DS but I guess wats most interesting is this new feature. Maybe its the ability to create your own fighter using the camera's on the 3DS? or backgrounds to fight in?
What do you guys think the new feature could be?
Author: Liban Ali