Hey y'all,
I'm back again with another 1st impressions and the next game that I was able to try out was Dragonball Raging Blast 2!

A Dragonball Raging Blast 2 demo was available on the Playstation store this week (among other things) and here's my verdict based on the demo so far.

The demo starts off with you being able to choose between 4 characters and they were Super Saiyan Goku, Ultimate Gohan, Dabura and Kid Buu. You also had the choice between two stages and they were in the Rocky wasteland and in the Ice field. 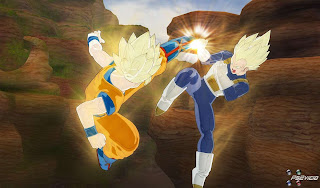 One aspect of the game that you notice straight away are the new graphics and stunning visual effects which have been changed from the 1st Raging Blast game. The textures for the characters are more bold and colours blend in a more gradient style, this true for the environment as well which gives a pretty striking look.

The fighting mechanics have changed too! A new combo system has been introduced, some new character based moves and never before seen visual and camera effects.

Also it was announced that a full featured, never seen before episode would be on the disc for the full game featuring a brand new enemy!

I wouldn't want to spoil too much just in case you have not had the chance to play it yet but so far Dragonball Raging Blast 2 has impressed with a whole host of improvements and visuals that bring you even closer to the battle.

I recommend you check it out!!