October 17, 2010
Liban Ali
0
Alright here we go! The latest installment to the Star Wars game series, Star Wars: The Force Unleashed 2 was available to try out on the Playstation store this week and here's my verdict.

The demo starts out with StarKiller being haunted by these visions he has no idea about and Darth Vader trying to get rid of them, but then it was this one particular vision that warned him about the upcoming betrayal of Darth Vader and this is where StarKiller attacks him using lighting and busts out the window.

Intresting gameplay appeared after this as you are free falling (god know's how many feet) and the objective here is to make it to the bottom while manouvering from any obstructions and using the force to clear the way. 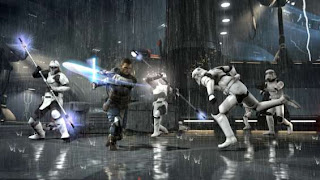 Graphics wise, It's not a huge step up from the original force unleashed but character facial animations work brilliantly with the voice acting to bring a more realistic experience although you still use the necessary moves you had in the 1st game to attack and to solve puzzles with but they're animations are smooth and slick. Also there seems to be a fair amount of dismemberment with the limbs as you can slice a StormTrooper's head right off and it'll come rolling at your feet.

Well I would'nt want to ruin to much just in case you have'nt played it yet, however Star Wars: The Force Unleashed 2 looks to do much better than its predecessor with improved animations and new cinematic gameplay.

Star Wars : The Force Unleashed 2 is scheduled for release on October 26 2010!
I recommend you check it out!!
Author: Liban Ali