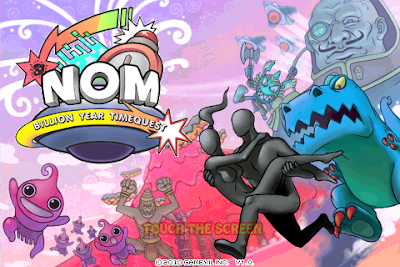 If you have never heard of Nom. Click here to see the trailer!

Out of some of the games that have come from Gamevil in recent years, this has to be the strangest of them all. You control Nom, a simple, laid back sprite with a desire to go time travelling in a machine he recieved from well... that would be spoiling.

The aim of the game here is simple, you travel through time and visit era's that are split up between the past and the present. There are usually four era's in each part with one of them needing items from the other 3.
This is a simple unlocking mechanic and works nicely for the most part, however later on in the game you encounter era's in which you don't do anything and still recieve an item. This really doesn't add anything to the game other then the usual banter but beyond that, it feels like an extra that could have been developed more or just completely left out.


Nom uses a very simple mechanic for its gameplay… tapping. You as the player must tap the screen at key moments during the level in order to progress. Sounds easy right? Well its not because for most levels you practically need pin point timing in order to get ahead. I can't tell you how frustrating it was fighting the alien on the ship, chasing around a ball shooting out rings. However difficult it may be, it is indeed challenging which definitely makes it one of its strong points. 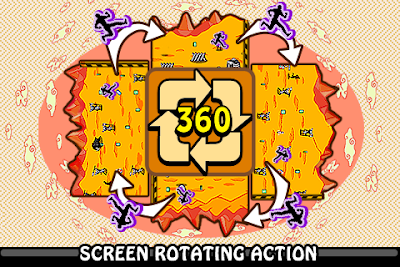 One other way Nom is difficult is that some levels require Nom to run from one side to the other but as he reaches every checkpoint, the screen turns 90 degrees. Now I don't know about you but if a player is fully immersed in a game, messing with the screen is one of the best ways to put them off. It becomes taxing on the mind and the player will have to adjust to the new angle almost immediately. Personally I found this really challenging but Gamevil were nice enough to add save points so you can continue where you left off.
Another good mechanic used in the game are the Nom points. These are circular, red pickups with the letter "P" on them. You can find the Nom points spread out through the levels and they are very useful things. One useful thing about the Nom Points is that if you die in a boss fight, you can use the points to continue where you left off. Another good point about them is that you can use them to buy Nom snacks for a temporary power up or buy relics to increase Nom's stats so you have a better chance of completing a level. 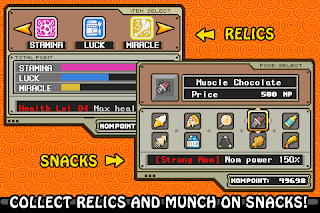 Graphics are very retro and at obvious view don't match up well with recent App games but regardless of that it shows off its own sense of style and the graphics work really well with the game's past era's.
Nom: Billion Year Timequest is a crazy, fast paced adventure that takes you through billions of years. While certain levels not really benefitting the game, bring it down. It's the lighthearted and fast paced levels that bring it back up. Also the fact that you can't take Nom seriously even when he is.
Graphics = 7/10
Gameplay = 9/10
Design = 7/10