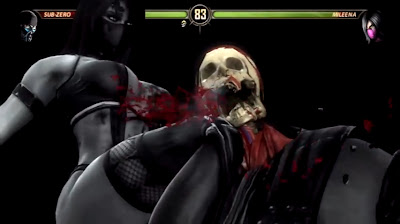 It’s been a while but yes! Mortal Kombat 9 or is it just Mortal Kombat? Is making a huge return and recently a demo for the new game was released to PSN users.

The demo gave you the option to choose between four characters, Johnny Cage, Subzero, Scorpion and Mileena in a ladder style tournament that should feel very familiar to Mortal Kombat fans.
So where do we start! Well let’s just say that the last time MK was seen was when they decided to go head to head against DC Universe, however it was stated that the final chapter for MK was Mortal Kombat: Armageddon which was released back in 2006.

It’s been a long time and it looks like they are going back to what made MK so great in the latest, upcoming version of the game, with a few new surprises of course.

One big new thing would have to be the graphics update. The character models look totally awesome and have a ton of depth to them, thanks to the X-ray move (which I’ll get into a little later). I also love how the characters show damage on the models from ripped clothes to blood, making it look really authentic.

Check out the video below of gameplay on the haunted trees stage!


The next thing is probably the biggest new addition in terms of graphics and for MK in general. It’s a move that can be performed once your entire meter is filled up and it is called ‘X-ray’. This move differs for all the characters and what it basically happens is that if hit correctly, your character goes on to perform a devastating move against your opponent, but that’s not all! While this move is performed, you’re treated to a view of the opponent’s insides and how the attack is actually affecting their body. It’s one feature that made MK go from gory to even gorier but it’s also a move that can really help you if you happen to find yourself in a pinch.

Once you maul the other characters I mentioned earlier, the demo concludes with a trailer showcasing all the upcoming features for the game.
Some of those features included;
Tag teams - You can now team up in new tag team matches, even perform awesome combos together.

X-ray’s – As I mentioned before, they are probably the most graphically impressive moves in the game and there’s a lot of them.

New fatalities – You think they would have stayed the same? Brand new fatalities are available for you to feast your eyes on.

The Krypt – Couldn’t really tell what this was but it looked like a way for you to gain upgrades or money.

Guest character - You may have already heard of this but the God of War, Kratos will be available to play in the full game.

Another gameplay video, this time its Subzero vs Johnny cage!


So far so good I guess. Graphics look awesome and gameplay feels like they way MK should be. All that's left is to see how the full game will play out, which is being released on April 19th this year!
Author: Liban Ali