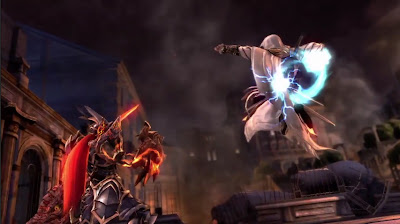 Today, Namco Bandai and Ubisoft announced that Ezio Auditore from the popular Assassin’s Creed series will be a playable guest character in the upcoming Soul Calibur V for the PlayStation 3 and Xbox 360.

This monumental collaboration will let players control Ezio and his wide range of assassination tools including a Roman Longsword, Stiletto, Crossbow, Hidden gun and his trademark Hidden blade.


Along with the announcement of Ezio, Namco Bandai have also announced a Collector's Edition which will feature Dampierre as an exclusive bonus character.

Packed in a specially designed ‘book’ box, the Collector’s Edition of Soul Calibur V will include a high quality art book, original soundtrack CD, the making-of DVD, a DLC card for the Black Knight and Paladin armor sets, plus original artwork and letter on reproduction parchment paper signed by the team at Project Soul.
Author: Liban Ali