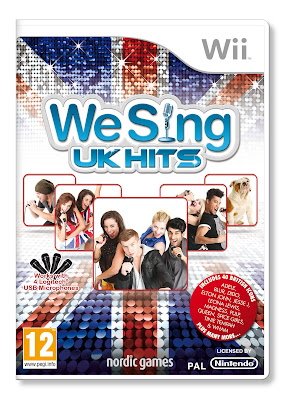 We Sing UK hits is the latest game in the series of “We” titles from Nordic Games. Just as the title suggests the game requires a microphone and you use those beautiful (or not so beautiful) vocals and sing along to your favourite UK tracks varying from Gabrielle to the internet’s favourite troll, Rick Astley but does We Sing UK hits wow the nation or is this part of the British experience better forgotten?

Gameplay
The game makes use of a USB microphone to track your pitch during gameplay and surprisingly it works really accurately. When singing to your favourite song, several bars appear on the screen. When you’ve hit the right note on a lyric, the bar turns gold.

Once the song ends, you are presented with your final score and a comment which can either praise you or completely insult. In my case, it was “You have no talent but full marks for effort”, which is actually pretty good for me. The gameplay is simple and easy to understand but also works just like if you were playing actual karaoke.
For the single player We Sing UK Hits comes with a Lessons mode. Here you can undergo 30 lessons where you work on your pitch to better perform in the game. The lessons do work for the most part but in some cases when I hit a low note, it reads it as high (continue this)

For the multiplayer, there are a variety of party games that can be played with up to three others. Some of which add a whole new functionality to the basic singing and reading off the screen. Games such as Pass the Mic add a sense of speed and accuracy by making sure you don’t miss your cue. The mic is passed over when that person’s number appears on screen in which they have to carry on the song.

Another game that I felt added more of a challenge was the Blind mode. In this mode the lyrics are taken out and you’re expected to sing a portion of the song by memory. Each player is pit against each other and the player with the most points at the end is the winner.
The party games add a sense of replay ability but other than those there is nothing that will keep me coming back for more. The track list is pretty extensive and it’s great to have more than once choice however once you get through a few, the rest can feel pretty much the same.

Graphics
There is nothing really special or outstanding that the game does visually however in the end, this may suit its purpose rather than trying to do something spectacular and ruin the experience. The only kind of visuals I can recall are in the menu’s representing the British in all its glory and that’s completely fine since all the songs are from the UK however I feel that they could have gone the slight extra distance to try and do something that will make this game stand out from the others in its genre.

Design
The game uses a lot of visual cues to show the player when to actually sing and when not to. When it comes to the gameplay, you generally have the music video running in the background with the lyrics appearing on the bottom of the screen.

Unless the video has an intro the bars appear immediately with a small dot that times the vocals. The design  worked pretty well considering that it replicates the karaoke experience but in your home. It’s really simplistic clean and nothing distracts you from what you’re meant to do.

The bar’s on the screen that turn orange is another good visual cue to show that you’re singing the way you’re meant to. Of course most of the design has already been implemented in other singing games but not as cleanly as it has been done in this one.

Final Verdict
We Sing UK Hits brings together some of the greatest hits that has ever been produced by the nation. The game features fun modes that improve on the basic singing only and has a track list with hits from the past and present. Of course at times during gameplay, the mic may not track the vocals as well and without even singing the right lyrics, you will be given full points, however it’s the karaoke experience recreated at home that counts and one that I’m sure singing enthusiasts will enjoy.

We Know Gamers Final Score = 5.6/10
Had a chance to play the game? Tell us what you thought of it in the comments section below!