Horrid Henry: The Good, The Bad & The Bugly Review 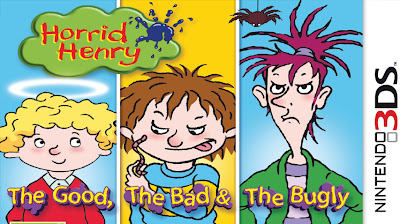 Nah nan na nah nah! Sound familiar? Well it should do to your little brother or sister. Everyone’s nightmare child, Horrid Henry makes his way to the 3DS in Horrid Henry: The Good, The Bad & The Bugly and looks to cause even more trouble.

Fans of the TV show can recall the energy and craziness of the character, especially when you hear him say “EUREKA”! But can Horrid Henry complete this mission as leader of the Purple Hand Gang? Or will he have to turn over a new leaf and become like his younger brother Peter?

Story
Henry’s little brother has lost his favourite bunny stuffed toy and Henry is getting the blame for it. Left with no choice, Henry embarks on a journey to find Peter’s bunny. This leads Henry going through several enemies before eventually having a final showdown with the Octo-Boss.
The story itself is pretty basic, nothing really stands out that makes it appealing to the player. I found it awkward that Moody Margaret was mentioned yet she did not appear during the game and funnily enough, she’s even featured on the game’s box art. It was upsetting that the cutscenes were simply still images with sound rather than a small animation because even when it came to certain still images, there was no sound and you couldn’t understand what was going on, yet with an animation there could have been several expressions used to keep you in the loop.

Gameplay
The basis of the game is 2D platforming and for Henry to go through all four worlds and defeat the final boss at the end. While going through these environments, Henry can collect cookies which add to his final score at the end. Henry also make use of his Goo Shooter to take down enemies in which it can also be upgraded as you enter new worlds giving you access to stronger attacks.

The game has a good sense of progression in difficulty as the early levels contain slower enemies to the later ones which have enemies that continually chase you down but also attack faster and more efficiently. Mechanics wise, there isn’t much to it, throughout levels you may find mushrooms that will give you a boost in your jump or switches to activate a platform or open a door however the more unique mechanic would have to be the Yo Yo mode.
Yo Yo mode is only used during sections where Fang the Hamster is involved. In these sections there is usually a puzzle that needs to be solved, either building a bridge from the parts that are thrown to you or to complete an image using blocks. The bottom touch screen is used to control where you want that certain object to be in the environment and the trigger buttons are used to hook on to that object. I particularly thought that it was a great idea but it was such a shame that it was barely used through the game and only in those specific areas.

Graphics
Following the theme of Horrid Henry being a childhood figure, the overall world’s look and feel compliments it well but that’s the only thing that stands out. As for the textures and models, for a 3DS game they lack heavily in quality which just blemishes the overall product. The worlds themselves were creative but from an artistic standpoint not enough was done to fully realise it.
The use of 3D within the game itself is good as the characters and backgrounds pop out of the screen, even something as simple as the health bar hovers above however in a way, the use of the 3D may have been overdone and to an extent can stress the player out. I’m speaking in terms of seeing it from a full 3D side however for this particular title pushing the slider halfway, maximum 3/4 of the way is enough.

Final Verdict
Horrid Henry: The Good, The Bad & The Bugly is an interesting concept that was produced on a poor level. Environments and characters lacked heavily in their quality and look. Cutscenes were boring and the overall story didn’t make much sense. I fear that fans of the TV show or book would want to stay away from this.

Final We Know Gamers Score = 4/10
Had a chance to play the game? Tell us what you thought of it in the comments section below!

Horrid Henry: The Good, The Bad and The Bugly