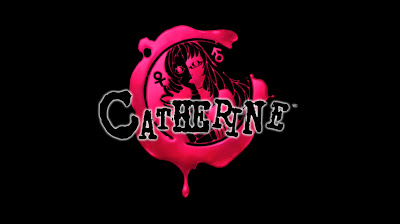 A whole year after the Japanese release and approximately 6 months after the N. American release, Atlus’ Catherine finally hits European shelves. Primarily known for their RPG’s Atlus takes a daring new approach by incorporating many themes in their ‘puzzle-platformer/survival-horror adventure’ game. Question is, was it worth the wait?

Story
Players take control of Vincent Brooks, a man whose life gets caught up into a twisted love-triangle with two women, who both (funnily enough) share the same name. Faced with decisions such as marriage and parenthood from his long-term lover Katherine McBride, Vincent wants nothing else but to escape his troubles, unfortunately this is when he meets the girl of his dreams, Catherine. This comes at a price as Vincent begins experiencing terrible nightmares which have been claiming the lives of several young men, as the in-game news reports.
The main driving force of the game is the narrative which plays an important part throughout, as a lot of the game is cinematic centred (courtesy of Studio 4°C); it plays upon typical stereotypes such as dealing with physical and emotional infidelity and commitment. An adult-only game heavy on social interaction, particularly with Vincent’s friends and other random characters, it receives an added twist of paranormal when the demonic and supernatural elements get thrown into the mix. The actions you experience are enhanced by the choices that you make throughout and the game also features multiple endings based on the route the player decides to take Vincent.

Gameplay
The gameplay (when Vincent falls asleep) revolves around solving puzzles, mainly in the form of block-moving games which become more and more challenging as the game progresses. The aim of this is to try and construct staircases which Vincent can use to scale to the top, throw in other climbers, special traps, the ever-crumbling blocks beneath you, the ever changing pattern of the falling blocks and you have a very interesting take on an old school-classic (Q*Bert). Many if not all of the tower climbing sequences are then followed by a manifestation of Vincent’s real-life problems, which in turn can be described as the boss sequences.
Catherine is quite relentless when it comes to difficulty, similar to some of the complaints received when Devil May Cry 3 was released; the North American and European versions were actually toned down according to Atlus. Alas, players will fair many gruelling and possibly repetitive moments but the feeling is overshadowed by the rewarding emotion you get when you succeed.

The portion of the game where Vincent is awake is dialogue-driven and you’ll spend most of your time in conversation with Vincent’s friends at the ‘Stray Sheep’ (the local bar) for those who choose to skip this, you end up paying a heavy price as far as the overall experience is concerned. The morality meter is the game’s way of showing you how your decisions are influencing gameplay; it ranges from ‘freedom’ to ‘order’.

Graphics
The visuals are a fantastic blend of cel-shading and animé, and due to the nature of the game it’ll feel as if most of the action is unfolding in front of your eyes like a TV show (until the demanding puzzle-blocks force you to grip your controller in a frantic sweat).

The voice acting is solid throughout and the art-direction is fantastic but you wouldn’t expect anything less from the people that brought you the Persona series. Many of the bosses you come face to face are so outrageous that it does make you wonder if the art direction team were on something when they drew up the initial sketches. Nevertheless the colour and imagination is one that is truly unique and you won’t be able to find the same level of visual offering anywhere else on the market.

Final Verdict
In an age where developers and publishers are playing it safe to try and keep sales and revenue constant, Atlus have refreshingly decided to break the mould. This gamble seems to have paid off as Catherine delivers an engaging, well-thought out and at times, humorous plot. It is definitely unlike any other experience on the market and the plot being the main centrepiece does not disappoint. A fair amount of people may be turned off by the heavy narrative but given the time and attention, Catherine engrosses its’ audience in a performance worthy of a Golden Globe.

We Know Gamers Score: 8/10
Had a chance to play the game? Tell us what you thought in the comments section below!

Reviewed by Changwe Mutakasha
on Feb 15 2012