The cool guys and gals over at Namco Bandai invited a few members of the We Know Gamers crew, down to their office to try out a few of their upcoming games. One of those games in particular was Inversion, a shooter which tests your skills but also checks to see how well you deal with spacial disorientation.

Alright so to put it simply, the game is a third person shooter which completely messes with gravity to bring a whole new meaning to strategic multiplayer matches. The maps themselves are the real interesting points by making use of a closed of environment and allowing the player to move about it freely made for some interesting new mechanics and ideas that could allow the standard shooter to evolve even further. Of course there is the issue of how heavy the spacial disorientation affects you as I found myself for the first few minutes completely lost with my surroundings however I suspect that the more you play, the less it will affect you. 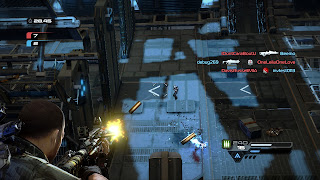 As for specific mechanics, the one that stood out the most would have to be the ability to play with gravity. Blasting enemies with small bursts of gravity lifted them off their feet and allowed you the freedom to blast them down in mid-air or execute them in style. There is also a cover and shoot style which was useful at times but you were rarely safe from enemy fire.

At the moment the weapons seems heavily unbalanced with the shotgun having enough power to blow you to bits in two shots. Obviously this isn’t the finished version but I seriously do hope this gets fixed or we’re in for some very annoying multiplayer games.

With the little time we had to try out for Inversion, we are totally happy with the game so far. Interesting new mechanics and hours of fun seem set for this title, while we didn’t get the opportunity to give the single player a run we expect more surprises in that.
Author: Liban Ali