The cool guys and gals over at Namco Bandai invited a few members of the We Know Gamers crew, down to their office to try out a few of their upcoming games. One of those games in particular was Ridge Racer Unbounded, a kind of arcade style racer that proved to be both competitive and incredibly fun.

Control wise, it really depends on the stats of the car you’re using as each one moves and feels different. A car with great handling will allow you to take those corners easier but on the longer stretch, it will lack the speed needed to truly pull away from the competition. Obviously the latter being that a car with high speed is more difficult to control and less forgiving when it comes to turning. This kind of tuning feels believable during gameplay and in a way, it just means there is a car for everyone’s play style. 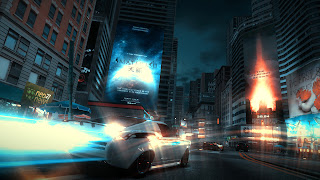 There is more than one way to get ahead in the game and one in particular being what the game calls, “fragging” your opponent by either using your gauge to boost in to them or boosting into a hazard that in turn affects them e.g. boosting into an oil tank next to your opponent will cause it to explode and blow the opponents car off the track. You can also use the boost gauge to break through environments and carve your own path through the game. Using this can become crucial in whether you win the race or not but also add a strategic element to it allowing you to plan these certain events ahead of time, especially if you know the track layout well.

So far Ridge Racer is a solid racing title that provides some competitive and hilarious racing moments through its use of destroying the environment and other racers. There are other options such as track creation and such but be on the lookout for more details on those once we have a review up!
Author: Liban Ali