In the war on aliens, some problems are solved with the pull of a trigger. In Alien Fear, a new arcade-style, first-person shooter (FPS) from City Interactive every problem is solved through superior firepower. Powered by the Unreal Engine 3, Alien Fear promises to deliver visceral, non-stop, run-and-gun action.

Alien Fear is a head-long rush of adrenaline-filled, close quarter combat where players assume the role of a highly trained elite commando on a mission of sabotage. Whether fighting across beautifully composed sci-fi vistas, or working co-operatively to buzzsaw your way through hordes of aggressive enemies, Alien Fear is a sustained burst of arcade aggression.

See artwork from the new game below! 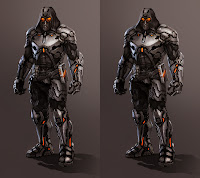