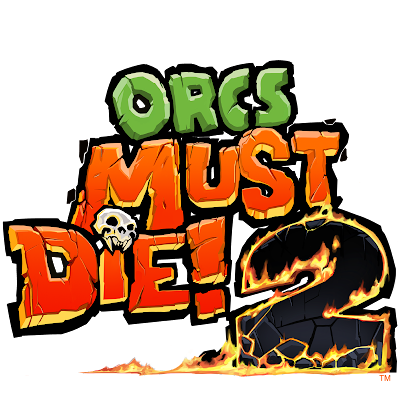 With less than a year since its original release Robot Entertainment are at it again with another instalment of their successful tower defence hybrid, appropriately titled Orcs Must Die! 2.

Gameplay
Orcs Must Die! 2 is built upon the same framework as its predecessor. Vicious waves of orcs emerge from several portals and the player is tasked to prevent the savage creatures from trampling through the stage to the exit on the other side. In order to stop the mob, traps and defensive structures must be cleverly placed to slow, hinder or outright kill the horde.

To the uninitiated Orcs Must Die! 2 is another entry in the ever popular tower defence genre, which has been exhausted to near death in the last few years. However Robot has adapted the tired old archetype into a refreshingly unique experience. Orcs Must Die! 2 allows players to control a character that can personally get stuck into the combat themselves, while still providing the old staple of structure building that the genre is famous for.
The sequel now offers a choice of which character to play. The cocky and dim witted hero from the original game or his nemesis turned ally, the evil sorceress. Each character presents a different build of skills that will cater towards an individual’s play style. The apprentice keeps his familiar hands on approach from the previous game, which allows him to shoot and hack down orcs on his own but suffers from a lack of magical powers. The sorceress on the other hand while fragile possesses a vast array of magical tricks, such as being able to mentally control the orcs, forcing them to turn on their green skinned brethren.

With the addition of a new character, the main emphasis this time around is centred on co-op play which is a fantastic feature, however sadly its integration feels more like an awkward trade off than a worthy addition. The single player variant by contrast is unbelievably hard compared to its predecessor and the shorter range of levels do not even feel like they have been balanced enough to cater for solo players. Another major fault with the co-op’s implementation is that players can only play with people in their friends list with absolutely no ability to team up with a stranger on the internet, leaving those without any ally, out of luck.

Graphics
Orcs Must Die! 2 retains its notable graphical style. In fact the graphics have not changed at all since the last instalment with the exception of some new character models, though that is not necessarily a bad thing. For those unfamiliar, the game holds a crisp cartoony aesthetic that works well with the overall setting and tone of the subject material. The adoption of the art style also does a great job of escalating the high level of violence without being unnecessarily gratuitous or disturbing.
Everything in the environment stands out with great clarity preventing any confusion even during the most frantic of moments and the draw distance is more than adequate. Though that being said the greatest graphical aspect of the game is in its use of dynamic lighting which adds additional splendour and warmth to the environments.

This impressive atmosphere is bolstered thanks to a competent soundtrack which holds a great degree of range, providing excellent pathos to the gameplay. Simple and peaceful melodies are played during downtime that invokes a sense of calm, allowing for careful pre-planning before the next wave. While the main action sequences are heightened by an intense score that creates a sense of even greater urgency.

Design
Though showing some problems in the gameplay department, Orcs Must Die! 2 holds together very well due to the foundations of the original title. Players will start with only a small number of traps and weapons and by fulfilling certain criteria will be granted with skulls. These skulls act as a valuable currency that allows for the purchasing of additional weapons, traps and other equipment.
The amount of traps and upgrades this time around is monumental in scale and a serious amount of play will be required in order to obtain everything that the game has to offer. With this realisation it doesn’t take long before the need to play for more skulls emerges and luckily there are many ways to do this thanks to some additional modes.

Endless offers a far tougher survival scenario to about half of the regular stages including some unique to the mode itself. Endless is brutal compared to the main game yet the rewards are great and if it’s possible to rustle up a partner it is without a doubt the best mode in the game. Also there is Classic Mode which is only available to those who purchased the previous game allowing them to play some of the maps from the first title with all of the new features of the sequel.

Despite everything it does right one bizarre problem with the game should be noted as it could easily affect your purchase, that being the controller support seems to be flat out broken. All menus and even un-pausing the game are without any controller functionality which forces the players to switch between both a pad and a keyboard. In addition button prompts are un-changed and considering that the original game had fully working pad support makes this problem even more baffling than it should be.

Final Verdict
Orcs Must Die! 2 still retains everything that made the first title enjoyable, though some of the additional features have accidently made this game just too un-forgiving for some. Think of this as an expansion pack of old rather than a sequel that you can jump straight into. But if you’re a fan of the first game and you possess like minded friends then you are in luck as Orcs Must Die! 2 is a fantastic title. However if you are neither of these then I would suggest sticking to the first game in the series before proceeding any further.

Final We Know Gamers Score = 7/10
Had a chance to play the game? Tell us what you thought in the comments section below!

Orcs Must Die!2 Review
Reviewed by Spencer Marshman
on Aug 04 2012