Preview: Revisiting The World Of Ni No Kuni: Wrath Of The White Witch 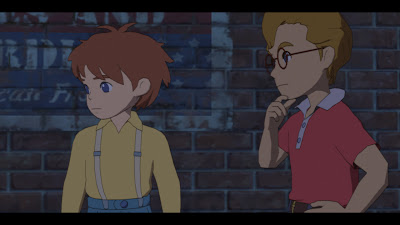 The collaboration between Level-5 and Studio Ghibli looks to be a real special one as we had the opportunity to once again visit the world of Ni No Kuni: Wrath Of The White Witch and see what magical gifts the latest build of the game had to offer during its first three hours. Aurore Dimopoulos had the chance to demo the title at its early stages so click here to check out her initial thoughts.

Right so this time we were shown the game’s actual beginnings and therefore, we had a better idea as to how things got started and the kind of direction Level-5 where heading in with the narrative. So this includes introductions to certain characters, the actual accident leading to the death of Oliver’s mother but more than anything, the relationship between Oliver and Drippy along with developing the main character from a sniffling cry baby to a serious hero.

For those who may not be up to date, the story begins with the death of Oliver’s mother in which the stuffed doll she gave to him ended up transforming from his tears into the fairy Drippy. Drippy explains to Oliver that he comes from a parallel world and that there may be a chance to save his mother if he went with him. From what I saw, it seems to be paced pretty well and there doesn’t seem to be any signs of areas being rushed or details being weak. They say that for every person in Oliver’s world, there is an opposite in Drippy’s therefore we can expect some very interesting meetings especially coming across familiar characters on the other side with perhaps different personalities.

One of the things we got to have a better look at are the battles and spells. Ni No Kuni’s battle mechanics is like the Final Fantasy format where you select commands on a turn basis however mixed with the ability to move around freely. It’s an interesting way to go about it and pretty much allows you a lot more freedom in terms of planning out your attack and defence. While it does work to some extent, it’s also balanced in a way that you can’t just simply circle your enemy and escape everything as some spells automatically hit and in this case, the defence option should be used. Another aspect that was expanded on was the use of Familiars in battle. These are creatures which are born from Oliver’s soul and come with their own skills and abilities so think of them as Pokémon except there is no poke ball and you don’t catch them. These creatures can be levelled up however their battle time is limited and they share Oliver’s magic power and health. In a sense it does make sense to limit their abilities as it adds to the whole balance of things, seeing as you can take three Familiars into battle with you, although it’s currently not known how many you can have overall and if there is a system to be able to swap them around.

The fact that the legendary animation studio, Studio Ghibli were collaborating with Level-5 already made Ni No Kuni a game to watch out for in 2013! It really retains what makes all those films so great while adding in the interactive element that only videogames can bring. Ni no Kuni: Wrath Of The White Witch will be released on January 26th for the PlayStation 3 so if you are a fan of Ghibli, Level-5 or anime itself, it’s well worth picking up.
Author: Liban Ali