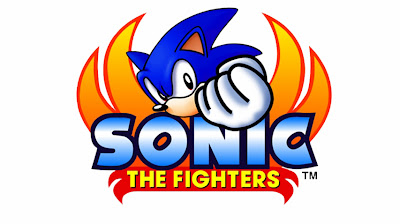 Sonic and his friends are back but not in the way you would usually expect them to be. This time they’ve hung up their running shoes to go brawl it out in the ring instead, however is this a step in the right direction for the franchise? Or should have Sonic stuck to what he does best?

Gameplay
There’s an interesting story behind Sonic The Fighters as it all begins with a programmer who got bored while working on the Sega Saturn beat ‘em up, “Fighting Vipers” and decided to add in some “Sonic the Hedgehog” characters purely for his own enjoyment. When his superior’s found out what he was up to they took him aside and rather than discipline him, gave him the green light to start production on a Sonic themed beat ‘em up game and so a few months later, Sonic The Fighters was released.
The game is effectively Fighting Vipers however the cast is replaced with those from the Sonic series and along with this, a few fundamental changes were made to the game’s mechanics. Sonic the Fighters features a lot of your favourite characters from the 90’s era of Sonic the Hedgehog such as Sonic, Tails, Knuckles and Amy. There are also a few less well-known characters from the cartoon series such as Bean, Bark, Espio and Fang. Each of the characters has their own sets of moves and special attacks; although it’s clear after playing that some are a lot more powerful than others as Knuckles seems to be a powerhouse against someone like Espio or Amy. With all characters having the same speed, health and almost identical handling it seems unbalanced in favour of the more powerful characters such as Knuckles and Sonic, leaving smaller characters such as Espio, Bean and Fang helpless in a fight against them. When you come across the AI playing as one of these characters it can be extremely difficult to defeat them. The overpowered attacks coupled with cheap tactics and an extended ability to block makes it almost impossible to defeat them. The AI seems to slip through your attacks to knock you down while your guard is down. Once you have been knocked down the computer will continue to hit you so you cannot get up to defend yourself.
Unlike the Armour system that we see in Fighting Vipers, Sonic The Fighters instead features a Barrier system. This allows characters to block a certain amount of hits before they are completely unable to block. This also carries over the 2 rounds so you must be careful not to use it all immediately; otherwise you risk being completely exposed to punishment later in the game. In my opinion I think though this was valid, (due to the fact that Sonic the Hedgehog characters do not wear clothes) I believe that the armour system was much more well thought out. It seems unfair to take away the ability to block for the rest of the match just because you took a lot of punishment in the opening seconds of the first round.

Online Gameplay
Much like Fighting Vipers, Sonic the Fighters features both Offline and Online Multiplayer and only game type which is a straight up, best of three bout. I was able to play quite a lot of local multiplayer with friends but the online for the most part seemed to elude me. After searching for almost 20 minutes I found an opponent only for the lag to be horrendous and make the match slow and laggy. Even at its best, it’s still not up to standards however for the most part manageable. It’s unclear whether this is down to the matchmaking itself or just the connection of the players themselves although afterwards I was unable to find anyone to fight at all, even after leaving it to search for 40 minutes it was still unable to find anyone.

Graphics
Sonic the Fighters has stuck with its classic blocky, extremely bright coloured graphics. For player’s with epilepsy this may be a game to steer clear of due to the constant flashing of bright colours and small gold rings flying all over the screen. A few graphical inconsistencies can also be noted, for example when you knock a character in the air, the textures seems to stretch as if they are stuck to the ground. The environments and arenas that you fight in are all taken from other Sonic games and all follow the blocky, bright colours thats featured everywhere else; from the classic fan favourite; Green Hill Zone to the slightly more obscure levels such as Robotnik's flying base.
The soundtrack has also remained unchanged and features some odd song choices. The music all seems to be some sort of dodgy 90’s techno, though that says more about the 90’s than the game itself. The game does however feature some memorable sound effects such as the sonic jumping noise and clatter of rings across the ground. Sadly that’s where the good stuff ends.

Final Verdict
Considering the game was born from Fighting Vipers it’s hard to see how so much went wrong. Fighting Vipers was a strong entry into the beat ‘em up genre but Sonic the Fighters just seems to be a complete mess. Cheap AI, graphical inconsistencies and a terrible Online Multiplayer makes this quite an unpleasant experience. The game itself seems rushed and the import of the game to Xbox Live Arcade from the Sega Saturn seems quite buggy. I think it’s safe to say that Sonic the Hedgehog should maybe steer clear of the fighting game genre in the future.

Final We Know Gamers Score = 3/10
Had a chance to play the game? Tell us what you thought in the comments section below!