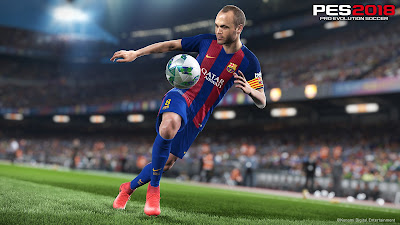 Konami have recently announced Pro Evolution Soccer 2018 (PES 2018) bringing along with it a variety of new features and improvements.


PES 2018 features more new additions than any other PES title in the last 10 years, and no part of the game has been left untouched. At its heart remains the famed gameplay where users enjoy complete control over the on-field action, using players that behave, move and react just like their real-life counterparts. New additions to the control systems add more fluidity to the game, while a new user interface makes accessing the many facets of PES 2018 a simpler process.

PES 2018’s visual acuity has also improved. A new real Capture system provides true-to-life lighting across day and night games, while over 20,000 components have been faithfully recreated to recreate the turf, tunnels, and the surrounding areas of stadia such as Camp Nou and Signal Iduna Park. The individuality of how players move, shape to shoot and make passes is also closer to real life, with Konami motion-capturing players within realistic environments in a complete overhaul of the in-game animation system. Core movements such as walking, turning, and posture have been reworked also, while the player models now have greater variety, with attention paid to the way kits fit differing physiques. Konami’s agreements with partner teams will also see tattoos recreated on players as well.