Take a Look at the Combat in Upcoming Absolver 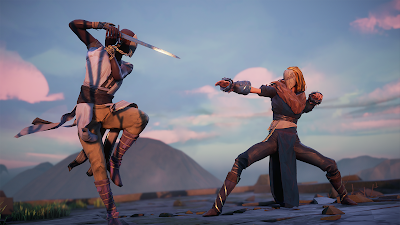 
Absolver has been announced to be releasing on both Windows PC and PlayStation 4 August 29th!

Absolver puts players behind the mask of a Prospect, who has taken a sacred vow and chosen to join the Absolvers, an elite corps of combatants fighting to maintain stability in the world. Prospects will choose a combat style, each with their own special abilities, and assemble their own custom Combat Deck to create a personal fighting system in intense, real-time combat. Choose to wander the land alone, with friends, or find a mentor to spar and learn from to become a more polished warrior.

The trailer also outlines the Combat Deck. The Combat Deck is the inventory of attacks that players can use while fighting. Your deck is made up of four stances, and in each stance different attacks are available. Players can choose attacks and stances to create their own unique fighting style; it's fully customisable and you can change your stance on the fly to keep your opponents on their toes.