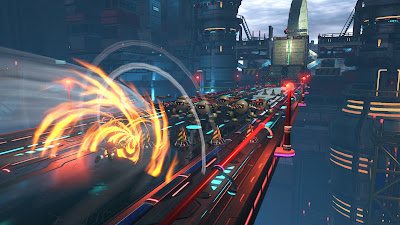 
The screenshots showcase the customizable Hero Character utilizing the newly revealed Drill Wispon to destroy enemies and speed through the Chemical Plant.

Wispons are an evolution of the Colour Powers from Sonic Colours and double as both offensive abilities and as a way to platform through levels quickly. In Sonic Forces, players equip their Hero Character with one of a variety of powerful Wispons, including the Drill Wispon, which allows players to drill dash on the ground to quickly traverse stages and climb walls. Players can also attack enemies using the Drill Wispon by charging and launching a drill punch to smash through and destroy enemies.