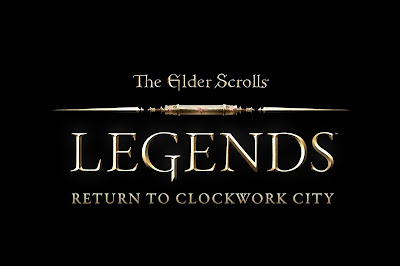 Bethesda have announced that The Elder Scrolls: Legends - Return to Clockwork City is available to download now!


Inspired by classic adventure tales, Return to Clockwork City is the latest story expansion for The Elder Scrolls: Legends. Set hundreds of years after Sotha Sil’s demise, embark on an epic journey to the fabled Clockwork City filled with danger, wonder, and riches beyond imagination. The road won’t be easy. Nightmarish abominations, traps, and betrayals all stand between treasure hunters and their fabled loot, as the fate of the lost city hangs in the balance.

New mechanic: ‘Assemble’ – When players play an Assemble creature, they will choose one of two
bonuses. That bonus will be bestowed upon both that creature and every Factotum in the player’s hand and deck.

New mechanic: ‘Treasure Hunt’ – While in play, these creatures will watch each card the player draws to see if it’s the treasure they’re looking for. Once the player draws everything the hunters want, a reward awaits.

‘Fabricants’ – All-new creature born of both flesh and metal that reward players for playing with neutral cards like the Dwemer constructs. These five creatures (one per attribute) offer some serious power, and create some exciting new deckbuilding possibilities