God Of War: A Guide On Where To Begin

With Kratos' return this April, PlayStation fans have a lot to look forward to and whether you're a fan of the series or just stepping into this mostly brutal, yet highly mythological setting, we've got you covered.

Having been around since 2005 and first releasing on the PS2, God of War was an instant hit. Placing you in the role of Kratos - an angry, bald Spartan warrior with a tragic past and quite possibly the pointiest chin in existence, you find yourself in a not so ideal predicament. Do you continue running errands for a God you no longer respect, or do you defy the Gods of Olympus on your quest for vengeance against the very God who once saved you from certain defeat?

Battling Hydra's, Gorgons, Harpies, Cyclops. Minotaurs and all manner of ancient mythological creatures, Kratos, fuelled by rage and armed with nothing but the Blades of Olympus, must overcome every obstacle ahead, including his own mental limitations, as he's tested time and time again by not just the Gods and beasts of ancient Greece, but his own haunting past. God of War was a hugely ambitious title. It has a fantastic story, driven by a highly engaging narrative that's guaranteed to keep you immersed from start to finish and has some of the most satisfying boss battles ever to be experienced, on a scale so grand you can only begin to imagine.

This is very much the pinnacle of Action/Adventure and if you're new to the series, you'll likely have a number of questions, so I've decided to help you out with the most obvious two below:

Why the mention of Greece? God of War is a journey into Norse mythology!

If you ever get the chance to play the original titles, I highly recommend doing so. God of War began in ancient Greece and remained there for the past six titles (seven if you include Betrayal on mobile). It has since moved on and into Norse territory, largely due to Kratos' actions and in part, due to there being very little left to do within the Greek mythos.

From a directional standpoint, I'd imagine it went a little like this; "Kratos' time in Greece is over. Do we end here or think of some new and fresh place to take our already established anti-hero of a character? What if, considering his past and power, we take Kratos away from Greek mythology altogether and into a new realm unfamiliar to both he and our fans? What if he somehow ended up in Norse mythology and had a showdown with Thor, Odin or Fenrir? That'd be cool and fitting for a man of such power."

Jokes aside, I'm sure there was a lot more to it than this and of course a high level of professional thinking to back it, but such a departure is deserving of an explanation, of which I'm sure we'll discover come God of War's release in April.

Oh, this isn't the first in the series? Then where do I begin?

Honestly, you have two options here. The first is to skip all previous titles entirely, jumping straight into the latest God of War adventure. The new God of War is a self-contained title, focusing more on Kratos' connection to his son Atreus, as they bravely journey together across the unfamiliar lands of Midgard and beyond. It serves as a departure from games of old with Kratos now being portrayed as a far more grounded character, who's seemingly grown much wiser with age. With a heavily changed attitude, Kratos is less about rage and more about getting things done.

If, like me, you'd much rather learn about a character via a hands-on experience, your second option is unquestionably the way to go and the path I'd personally recommend, for Kratos' past is explained over the course of all previous titles and though there are many, you can happily get by just playing four of them. The PSP titles are fantastic and to keep things short, take place between the main series, but they're really not essential to the plot. More than anything, they just add to what is already an outstanding series.

To begin, you'll want to buy God of War: Ascension. Though the last entry to release (back in 2013), God of War: Ascension is actually a prequel to the series and the very first one to play in chronological order. Reviews were mostly good, but a lot of fans found this to be the weakest link, myself included (initially). Having recently gone back to this and giving it another chance however, I can honestly say that in a lot of ways this is the best of the series. The story may not be as grand as previous God of War titles, but the action, finishers and cutscenes transition so seamlessly into one another that in a lot of ways this is the perfect God of War title, and yet it isn't the best. In hindsight, I feel the only thing that let this game down was the fact we'd played so many God of War titles up to this point, that the gameplay just finally felt stale.


If you want to experience every title (including the PSP releases), then God of War: Chains of Olympus is the next title for you to sink your teeth into, otherwise you'll be picking things up from where it all begun, with the very first God of War entry. Simply titled 'God of War', this is the title that gave reason to Kratos' struggle in the lead up to his eventual rise and is one of the most unforgettable titles around. The sheer scale for its time was groundbreaking and the integrated QTE's (Quick Time Events) kept things fresh, exciting and immensely enjoyable. The brutality of it all only empowered this, while the musical score delivered one of the most atmospheric soundtracks of the genre to date. The original God of War truly was a title fit for the Gods and is still loved by many to this day.

To continue with the PSP trend, God of War: Ghost of Sparta is next and a truly remarkable achievement considering its release on a now somewhat dated handheld device. Set between God of War 1 and 2, Ghost of Sparta is definitely worth checking out, but again, is entirely skip-able, bringing us to my second favourite title of the series - God of War 2.


Not satisfied with the outcome of the original God of Wars plot, Kratos continues on the path of vengeance to hunt down and mercilessly kill even more Gods, feeling he has yet again been misguided by false promises. This time however, his aim is to remove the Sisters of Fate from existence, while in the process finding himself with an opportunity to get even with the Barbarian brute who forced him to make the pact with Ares in the first game. You also have your fathers insipid tricks to contend with along the way. Expect time travel, boss battles on an even grander scale than the original title and arguably the greatest opening sequence of the series.

In truth, every entry is a solid title and a credit to the franchise. Where God of War 2 was my second favourite entry, God of War 3 is in my opinion the very best the series has to offer. It is the pinnacle of the God of War series and that's not something I say lightly, nor is it something you'd expect, considering it's the third numbered title.


Being the only God of War title to be remastered for the PS4, God of War 3 is considered by many to be the very best of the series. Not only was it visually stunning on the PS3, the remastered version made it even more so and keeping true to the progression of the series, yet again takes things to an even greater level in scale. The opening sequence is insane and though I preferred the intro to God of War 2, God of War 3's beginning segment is not to be taken lightly. This is the game where Kratos gets to kill the final Gods of Olympus. The story is absolutely outstanding and the gameplay is so satisfying, you'll likely want to replay it almost as soon as you've finished it.

This is the end of Zeus' reign and the last journey Kratos will make within the realm of Greek mythology. This is the pinnacle of Kratos' power, emphasised by the utter hopelessness and despair displayed by the very Gods who controlled the world. Nothing can stand in Kratos' way. Not the Gods, not the Titans and not even Kratos' own past. 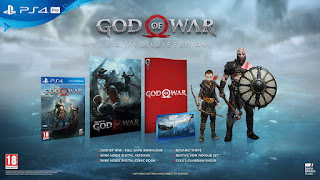 God of War is up there in my top three Action/Adventure titles/series of all time and is something I'm most passionate about. If you still have a PS3, I'd highly recommend picking up the four essential titles to the series, though you can also purchase the PSP releases on PS3 as they've all had the HD Remaster treatment. It's just a shame they didn't get the same treatment God of War 3 received for the PS4. You can pick each title up pretty cheap now and if you're not opposed to importing, America released the God of War Saga Collection for the PS3, which features all but God of War: Ascension and is up on Amazon for around £20. 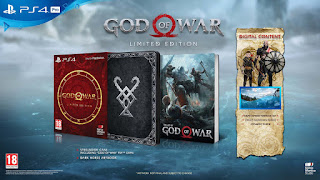 If it wasn't already apparent, I'm massively looking forward to seeing where Cory Barlog and the rest of the team at Sony Santa Monica Studios have taken the series with the upcoming release this April. Stepping into a new mythological realm, there's a lot that can be done with the series and whether it's all about Kratos training up his son, Atreus, only to die, kickstarting Atreus' path of vengeance, I don't know, but I'm eager to see how it all plays out and have enough faith in what I've seen to safely say it's going to be a Game of the Year contender. It's a little disappointing Terrence C. Carson isn't reprising his role as Kratos, but I'm fairly confident Christopher Judge (who played Teal'c in Stargate SG-1) will put on a good show. 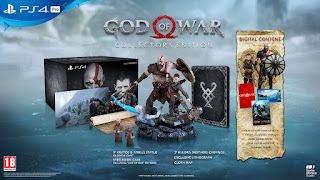 Outside of the standard (and digital) edition, there are two rather nice special edition releases up for pre-order. The first is the Limited Edition version (exclusive to GAME retail stores) and the second is the Collectors Edition which features a rather nice model that I'm sure collectors will appreciate, available for purchase from most major retail outlets.

God of War will be releasing April 20th exclusively for PlayStation 4 and if you'd like to hear more on what I had to say/theorise about Kratos' upcoming adventure, be sure to read my previous article here.

Got something to say? Let us know in the comments below or hit me up on twitter @CaptainCortez

You can also find us over on our Social Networks below:
http://www.facebook.com/weknowgamers
http://www.twitter.com/weknow_gamers
Author: Nik Gaydon