Last week I had the chance to play Dragon Ball Z: Kakarot, but will this energy blasting RPG bring with it the burst of excitement we're all hoping to experience, or will we have to wait just a little longer for that perfect Dragon Ball title?

For many of us, Dragon Ball Z was a large part of our childhood. Every time I came home from school I'd rush in to catch the latest episode of Z on Toonami, and having been a gamer since the age of 4, I also couldn't wait to get my hands on each and every Dragon Ball title that released. As the years went on however, I purchased less and less of the games, as many failed to impress and always seemed to leave me feeling underwhelmed.

I still remember the Half-Life fan mod I used to play called Earths Special Forces (ESF) which turned the world famous shooter into an actual Dragon Ball game, full working mechanics and everything. You could blast Kamehameha's and control them around the screen by dragging the mouse and really the only thing missing from it was a structured story. The gameplay at the time was fantastic and this gave me hope that one day we'd get a game truly deserving of the Dragon Ball name. Fast forward to now and we have the impressive Xenoverse series, the ultra competitive brawler - FighterZ and just around the corner, the upcoming, lightning-fast single player adventure of Kakarot.

Dragon Ball Z: Kakarot is a brand new single player Action RPG that features an almost fully open-world map, along with some of the most recognisable characters the series has to offer, plus some extra familiar faces that may even come as a surprise to you. The story will cover the entirety of the Z series, so it's ambitious to say the least.

I sat down with a whole host of other big named Journalists and YouTubers and spent a good three hours with this game and can honestly say I'm impressed.

As I began, the game felt a little sluggish and though this may have been simply down to me adjusting to the style and pacing of the game, it was noticeable. Once I'd played for about 15 minutes however, the game became a lot more interesting and I couldn't help but find myself fully immersed within the beautifully designed world surrounding me.

One of the first segments I played was a small outing with Gohan, where we had to collect apples for Chi-Chi. This was a simple case of using Goku's heightened senses to locate the apple trees and was more for character development than anything else. Shortly after this, I also had to catch a fish for dinner and what better way than to use Goku's prosthetic tail as a makeshift fishing lure? It's a little wacky, but this is why we love the series so much. Also, the size of the fish I caught? Let's just say you wouldn't be able to move for a week.

After a quick rest at a bonfire (no, this isn't Dark Souls), little Gohan is all tuckered out and regaining control over Goku, you carry your son back home to your loving *cough* overly assertive *cough* wife, Chi-chi. This then introduces you to the cooking mechanics of the game with a short and easy to follow tutorial.

Moments later, you're forced onto your flying Nimbus as you head out to visit your good friend (and ultimate pervert), Master Roshi. Along the way, there are a number of Z orbs to collect in various formations and though I can sense a horrible, horrible trophy just around the corner, these are required to upgrade and unlock more moves. You'll also find character specific items that will boost your stats even further, though these are mostly used on the community board, which is a special kind of board that allows you to place the icons of characters you come across to unlock more abilities and power. This is something I will go into much deeper come the time to review this, but for now, just think of this as character linking where certain characters lean more towards helping others in certain roles. As an example of this, Gohan is a great fighter and far surpasses his dad, but rather than simply being a great fit for the Warrior board, you could potentially place him on the Cooking board instead, which would then boost the effects of any cooking and/or recipes you decide to follow.

I should mention that cooking actually plays a big part in this game and Monster Hunter fans will feel right at home chasing down Deer and even Dinosaurs for their meat and bones. Generally speaking, you can eat anything edible that you find, but doing so gives minimal results. What you want to do instead is follow a recipe as recipes provide much greater stat boosts. Where Deer meat may increase your HP permanently by 2 points, a recipe requiring Deer meat may increase your HP permanently by 50 points instead, as well as increasing your ATK and/or DEF attributes. Some of these buffs are temporary, but eating anything contributes to character growth and almost always offers a permanent boost to your statistics, even if it's only 2HP at a time.

You can also collect Ore, but it's unclear what this will be used for. Perhaps there are vehicles you can craft in a R&D section? I didn't find a use for Ore in the time I spent with Dragon Ball Z: Kakarot, but it's obvious there's a use for pretty much everything, even if it's a simple case of playing errand boy as you do your best to keep the townsfolk happy.

As you navigate the map, you'll be doing a lot of flying, so it's a good thing this feels fun and fairly fluid. It's not as straight forward as I'd have liked and I did get my fingers confused for the first half hour of play, but once you gain a certain knack for flying, it's actually a lot of fun. You're also not just limited to your flying Nimbus and what I came to discover was if you want to get somewhere fast you should fly there yourself, but if you're on a mission to collect every Z Orb you can find, you'll want your flying Nimbus as it has a nifty move for gathering multiple orbs at once.

Flying to the ceiling of the map will take you to the World Map overview where you're able to choose which destination you'd like to fly to, and though this isn't quite a fully open-world map, each area is suitably sized and offers a great deal of space to play within, which is good because unless you're grinding for experience, you'll want to avoid many of the optional non-story environmental battles, and thankfully you can out-fly your opponents. Plus, that sense mode I mentioned earlier? It also reveals the power levels and auras of anyone you target and from what I can tell, it's highly accurate to the show.

It really feels like a ton of content has been packed into this as side missions appear to be plentiful and if you look hard enough you'll even find characters around the map you wouldn't otherwise have expected to be there. As for the main missions, you're in for a treat. For the first time ever, Raditz is actually a monster in combat.

As a fan of extreme combat, I absolutely love DMC, Ninja Gaiden and Metal Gear Rising, so my reflexes are razor sharp, but if you follow the story and only lightly level yourself, you're going to have a really tough time with Raditz early on. Most of us in the room found him to be an absolute beast to fight and as there were very few optional side missions in the build we played, most of us were under-leveled for the encounter.

We weren't allowed to record this section of the game, but for somebody so pathetic in the show, Raditz really makes you feel like an ordinary mortal being struggling to survive. That said, I'm sure the more hardcore of you will want to try him out at much lower levels than you should be, and that's the true spirit of the Dragon Ball series - overcoming all odds.

Kakarot's combat is fast, frantic and looks even more impressive when deciding which move to attack with next. The addition of temporary slow-mo when dodging attacks to prepare your own counter-attacks really adds to the adrenaline experienced within each and every fight.

Worth mentioning is that although this game is titled Dragon Ball Z: Kakarot, I want to make it very clear to you that you don't just play as our favourite lovable goofball. In the sections I played, I was able to control Goku, Piccolo and Gohan at various points, with each character having their own level progression, as well as their own signature moves. Unlike Xenoverse however, these aren't interchangeable between characters, but you can expect to see each characters most iconic moves because let's face it, what's Dragon Ball Z without Goku's almighty Spirit Bomb?

If it wasn't immediately obvious, the art style is absolutely incredible as well. CyberConnect2 have done a fantastic job in recreating the feel of the show, not just with the character design, environment and colour palette, but also with the layers upon layers of visual effects, the texture accuracy, costumes and whole general aesthetic. It's virtually like having full control over one of your favourite episodes and is easily on par with the fantastic visuals of FighterZ.

While you're at it, be sure to check out my 25 minutes of gameplay below:


Something else I noticed was the option of voices within the audio settings of the main menu. The game was set to Japanese by default, but as this is an option I can almost guarantee English voices will be a thing. I'm very particular on what shows I watch in Dub or Sub, and for me "Old Lady Goku" (Japanese Goku) never cut it, so having grown up with the original English Dub, if Kakarot features this, I'll be incredibly happy.

Overall, I had a fantastic time playing Bandai Namco and CyberConnect2's latest, and with additional original content not featured in the show (promised by Akira Toriyama I might add), I truly believe there's a lot for fans of the series to look forward to and cannot wait to get my hands on the final product. Will this be the greatest Dragon Ball game yet? It's still a little too early to tell, but with such a promising hands-on experience, it's definitely a contender. 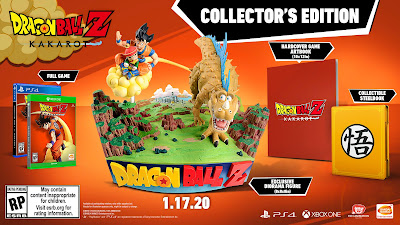 Dragon Ball Z: Kakarot will be releasing 17/01/2020 on PC, PS4 and Xbox One. You can also pre-order the above Collector's Edition from select retailers, so you might want to ask for money this Christmas. Now, let me see your Saiyan pride!

Got something to say? Let us know in the comments below or hit me up on twitter @CaptainCortez.

You can also find us over on our Social Networks:
http://www.facebook.com/weknowgamers
http://www.twitter.com/weknow_gamers
Author: Nik Gaydon